TOKENOMICS – A GUIDE TO UTILITY, BUSINESS, AND VALUE Money exists because it serves a fundamental purpose of the exchange of goods and services. It also exists because people trust money to be used as a medium of exchange. This trust exists because the government of a certain geographical area has made a type of money printed by the government ‘legal tender’. Currently, money also serves as a unit of account and a store of value. The ecosystem of traditional money can be classified within 4 participants – a government, a central bank, intermediary banks, and users of money. Significant costs and physical infrastructure have been spent on electronic money transfers to ensure the systems’ integrity, security, performance, and availability.

Any of these new developments didn’t bring a significant change in the economics of traditional money. However, cryptocurrency changed the game because here a network of computers, rather than a single third-party intermediary, validate transactions. The economics of cryptocurrencies started getting different names like cryptonomics (or Crypto Economics), tokenomics, or token economics. Crypto economics refers to the incentivization and validation structure of the cryptocurrencies. Token Economics goes beyond crypto’s only use case as a currency. It also covers the form in which their usage in the ecosystem is intended which defines the utility of a token. Hence, with supply and validation in the cryptonomics, tokenomics adds a layer of application to the ecosystem.

What you will learn: hide
1. Cryptoeconomics of a company

Cryptoeconomics of a company

Every token has two types of Values:

Starting from a company’s funding round, the design of ICO and the use of the token in the project determine the economics of the company. In Ethereum you always need to spend ETH to run smart contracts and use the network. Companies design the use of tokens to be used in marketplace-type platforms to buy and sell products or services.  Logic can also be added, with a mixture of quality game theory, which enables additional use cases. In the growing DeFi space, tokens are used as a medium of transactions, lending, transaction fees, collaterals, insurance premiums, and other points of exchanges in a business. Tokens with right ownership logic also allow for voting and rights. Token economy refers to the system of incentives based on cryptocurrencies that reinforce and build desirable behaviors in the blockchain ecosystem. These desirable behaviors with the user’s intent of using the token determine the value of any token. The incentives encourage users to work for the benefit of the platform. Cryptocurrency platforms incentivize users to perform the governance decisions by awarding them newly mined cryptocurrencies. To keep the supply of tokens in check, the rate at which new units are created—and therefore the total amount of currency in the system—is limited by the protocols written by the creator of the blockchain. These limits retain the value of a cryptocurrency by creating a sense of scarcity within the users. We will breakdown the use of tokens into categories.

Token Distribution
Tokens are distributed in the ICO rounds. The share of tokens assigned to the different divisions of the business which include the community, marketing, research and development, team, etc. demonstrates the model of a token distribution company is going to follow.

Price Stability
Companies build their economics with the objective of balancing the demand with the supply of the tokens. Cryptocurrencies are known for their notoriously volatile nature. Tokenomics help the companies to stable token’s prices by creating an equilibrium and help increase the price of tokens by increasing the demands.

Business
The primary utility of a token is established by the use of the token in exchange for the products and services a business is provided. The majority of the companies have developed decentralized marketplaces where users can trade tokens for the products and services the marketplaces are offering. Companies also distribute profits as dividends or as other financial benefits to their users. This also helps companies to maintain user loyalty and a robust network where tokens are in constant circulation.

Governance
Companies incorporate tokenomics in their governance models where they give voting or other decision-making rights to their users who pay or stake tokens. Some projects can include tokens held in reserve which can be added into the ecosystem at a later point, as a way to promote growth or to pay for system maintenance. Ripple is a good example of this. Aragon or Tezos show how it’s possible to have on-chain governance with voting-rights.

Adoption
Tokens are distributed as airdrops or for free to include more users in the decentralized ecosystem. The consensus mechanism used in the token’s blockchain also determines the pace at which new validators/miners and users are going to join the network. 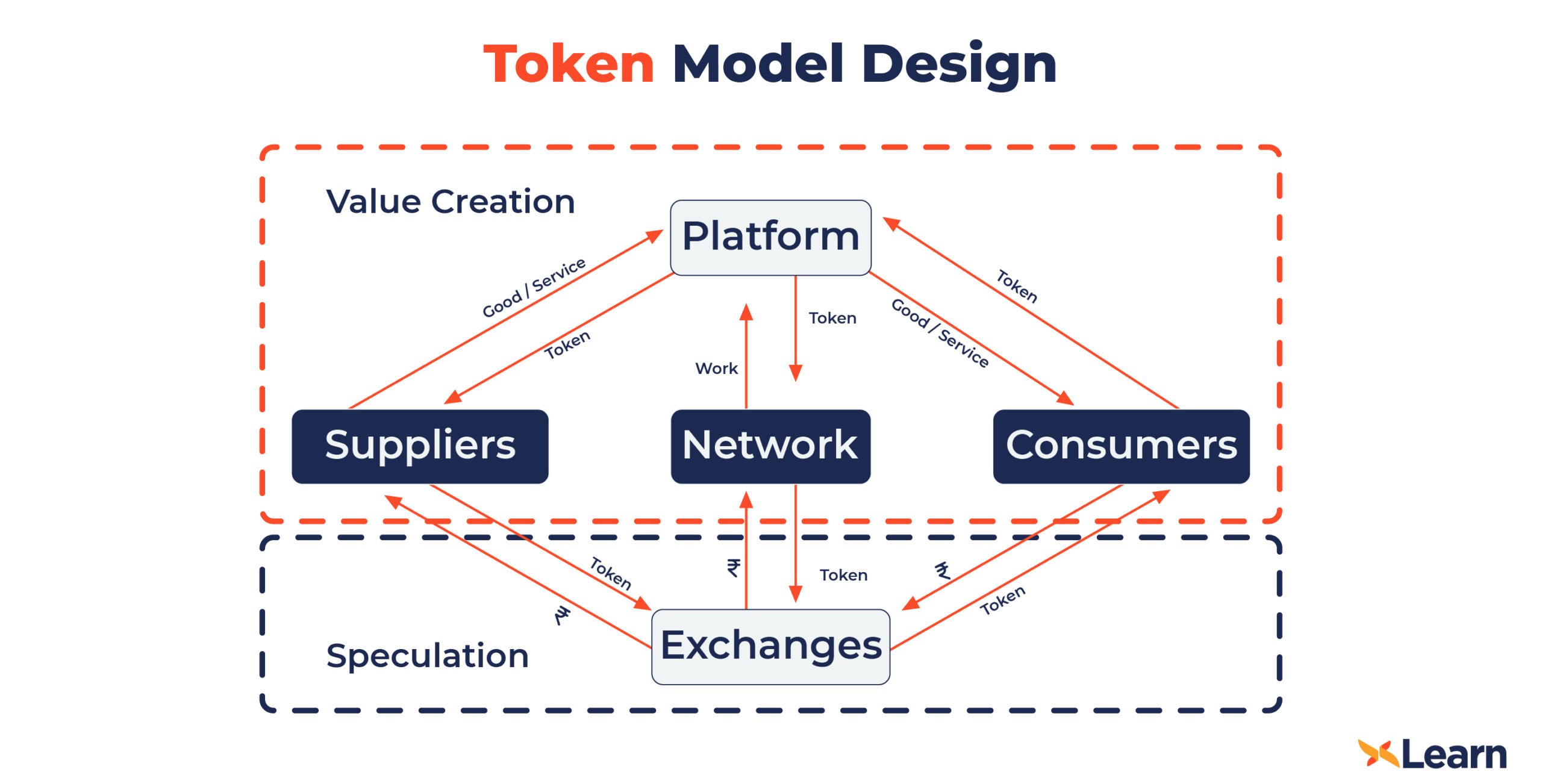 A general value creation model of a token

This scarcity breaks the rules of inflation which are tied to the legacy money standards. Due to inflation, the power of money to buy the same basket of goods is expected to be less in the future compared to today. Cryptocurrencies offer an opportunity for monetary experimentation and, by extension, new ways for managing inflation in the monetary supply. The supply, in case of cryptocurrencies, is governed by the communities or the foundation backing a token. Cryptos like Ethereum place community governance at a higher priority to maintain the ethics of a decentralized system. Privatized foundations of cryptocurrencies like Binance and VeChain use coin burning techniques to limit the supply and temporarily increase the value of tokens. Bitcoin, on the contrary, is not under the control of any individual, foundation, organization, or government.

The major shift in the ecosystem is because of the decentralization of the financial system. This shift has changed the nature, speed, process, and efficiency of transactions which directly challenge the money-based systems. A weak ecosystem could lead to other legal and dramatic consequences for the token holders. Hence, a thorough analysis on governance, providing incentives, profit-sharing, access to applications, and user’s contributions to the network are currently the most crucial metrics to consider before building a token economic model.  In the upcoming wave of tokenization where every tangible, as well as intangible asset, can be tokenized, the global financial ecosystem is going to undergo a massive transformation in its economic principles. The arrival of DeFi, clarity in regulations, updates in taxation practices, DAOs, and CBDCs are all steps towards a decentralized tokenized economy which will establish a new ecosystem for the people to bind themselves to.